Heraldry, that is the use of inherited coats of arms and other symbols to show personal identity and family lineage, began on the mid-XIIth century CE battlefield as an easy means to identify medieval royalty and princes who were otherwise unrecognisable beneath their armour. By the XIIth century CE, the practice had spread to nobles and knights who began to take pride in bearing the colours and arms of their family predecessors. Shields and tunics were particularly good places to display such symbols as lions, eagles, crosses, and geometric forms. As more and more knights employed coats of arms so they had to become more sophisticated to differentiate them, and the use of heraldry even spread to institutions such as universities, guilds, and towns. The practice still continues today, with many countries having official colleges of arms which assign individuals and institutions with new arms, and although the medieval knight has long since disappeared, the symbolism of heraldry remains a common sight from company logos to sports teams' badges. 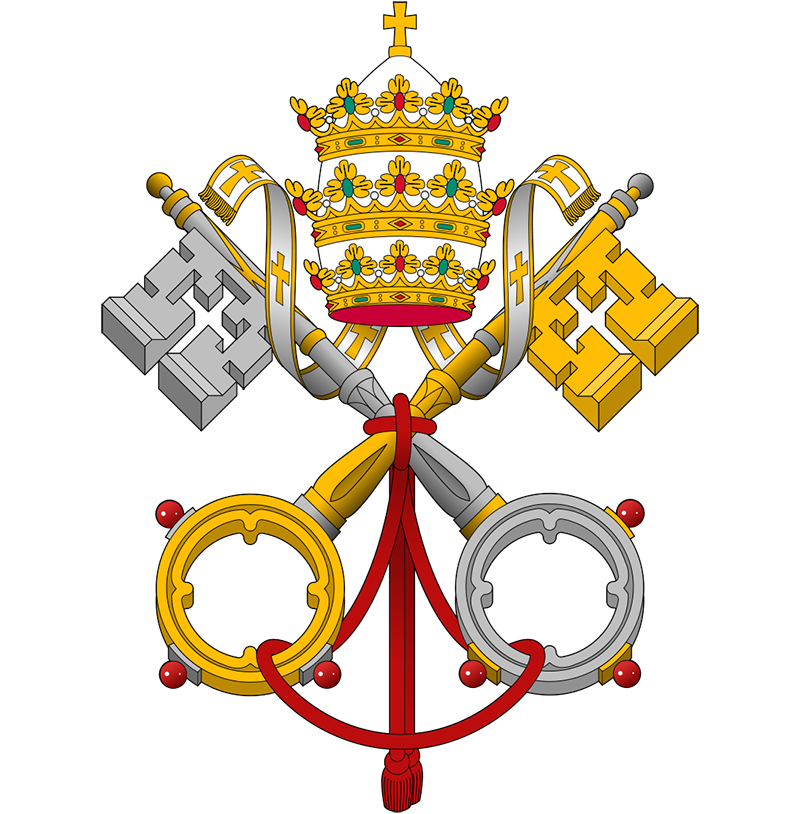 In the Middle Ages, heraldry was known as armoury (in Old French armoirie) and it was distinct from other and more ancient symbols worn by warriors on the battlefield because heraldic arms were both personal and hereditary. The name heraldry derives from the heralds, those officials responsible for listing and proclaiming ancient armorial bearings, especially at medieval tournaments. In the tournaments, a large number of knights either fought in mock cavalry battles or jousted against each other, and it was the heralds’ job to advertise the coming of a tournament, indicate the rules under which they would be held, and pass on challenges issued by one knight to another.

It was, above all, the heralds’ task to keep track of all the coats of arms and be able to identify which arms belonged to which name, perhaps listing them in a ‘roll of arms’. By the 14th century CE, as rulers grasped that heralds with their extensive knowledge of who’s who could be very useful sources of information on exactly who they were fighting against in battles, the status of heralds steadily grew. The heralds wore a short tunic (tabard) which was embroidered with the arms of their master. Heralds also acted as messengers and were given safe passage during times of war. Eventually, heralds were organising such important events as weddings and funerals for royalty and the nobility. The specialised study of family arms known as heraldry was now fully established, and it had become a social science with its own vocabulary, history, rules, and social grades.

From the XVth century CE, heralds and apprentice heralds (pursuivants) were employed in colleges of arms, which settled disputes over conflicting arms and examined people’s claims to have one in the first place. There arose a whole series of specific rules and conventions of heraldry, and it was these colleges of heralds who replaced the monarch as the power who granted or removed arms (due to cowardice or serious crimes). In England, for example, the function was and still is performed by the Royal College of Arms in, appropriately enough, Queen Victoria Street, London. Such offices helped to sort out the confusion which had arisen from anyone, even peasants, creating their own coat of arms, and they accumulated detailed records of all the arms that had ever been created in their jurisdiction. The oldest known English roll of arms dates to c. 1244 CE. Currently housed in the British Library, it is a single sheet, painted on both sides by Mathew Paris and showing 75 coats of arms starting with the king’s.

The Evolution of Heraldry

Medieval heraldry originated, then, sometime in the XIIth century CE as individual warriors - first kings and then knights, too - sought to show off to their opponents exactly who they were up against hidden behind the armour. The idea was that when the enemy saw the three lions motif of Richard I or the black shield of the Black Prince, they would tremble with fear in the knowledge they were not about to fight just any old knight. The retainers of a certain knight and those knights who fought for a particular baron or other nobleman might also wear their master’s arms and colours in special purpose liveries.

The next step was the children of celebrated warriors reusing the arms of their father and so the idea of a hereditary symbol developed with even daughters having the right to bear the arms of their parents. The first recognised instance of a coat of arms being passed on from one generation to another is that of Geoffrey, Count of Anjou (d. 1151 CE) and his grandson William Longespée (‘Longsword’, d. 1226 CE), who both have six lions rampant on the carved shield on their tombs. 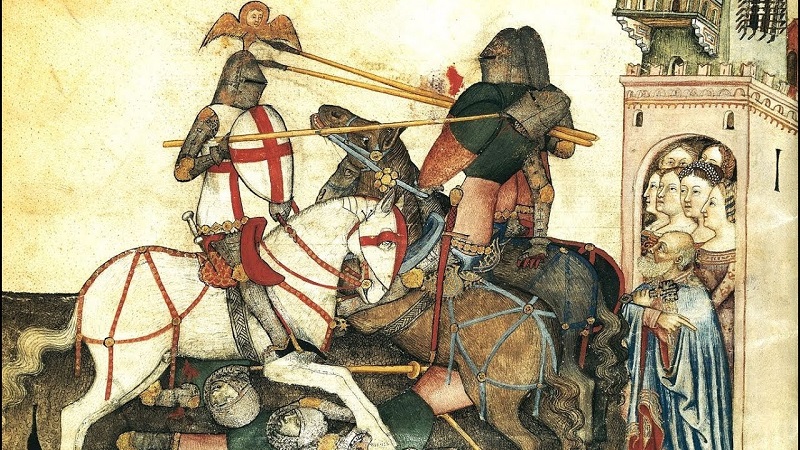 The first symbols of identification did not have to be very complicated, indeed, simplicity and boldness made them all the more visible on the battlefield. The most obvious and striking place to carry identification was the shield, which might bear a single specific colour or two colours separated by a horizontal, vertical or diagonal line. Then, as more and more knights took up the trend, so arms had to become more varied if they were to keep their purpose of identification. As a result, not just colours but also symbols were adopted, for example, lions, eagles, tools, flowers, crosses, and stars were all popular choices. Symbols were sometimes stylised because they had to be recognisable from a distance and fit into the peculiar shape of a shield. In addition, certain colours were not mixed as that made the shield difficult to identify (e.g. black on purple and vice-versa).

The next step was to create a unique combination of these designs with certain colours. An additional source of variety was when two families married and their coats of arms could be mixed (compounding) - from a simple half and half ensemble to including a miniature version in one corner of the other. There were also symbols added to coats of arms to indicate the offspring of a holder of arms, for example, a white line through the shield to indicate a first son who otherwise had the same arms as his father. Similarly, a coat of arms might carry an extra symbol to denote the holder was an illegitimate son of the original bearer of the arms.

Coats of arms could be repeated on other paraphernalia of warfare such as on the front and back of surcoats (a long sleeveless gown tied at the waist and worn over armour), pennons (triangular lance flags), horse coverings, banners, and hung below the trumpets of heralds. Although rare because it was expensive, some knights had their arms engraved on their armour. Coats of arms were not only useful in warfare, though. They were a good way to identify competitors in medieval tournaments and knights often had to hang their coat of arms outside the inn in which they were staying during the event. From this practice, the idea of a permanent inn sign took hold, a fact which explains why many of the oldest pubs in England have such names as the Red Lion, Rose and Crown, Black Swan, and White Horse, all classic heraldic symbols.

Coats of arms might appear in official records, where they were often used as seals instead of signatures, and they were painted on residence walls, appeared in the stained glass windows of churches, were sculpted in stone on building exteriors, painted on tableware, and, of course, were represented on the tomb of the person who had born the right to carry the arms while alive. The shield-shape was always maintained and even developed as real shield designs changed over the centuries. When the shield became redundant in the XVth century CE thanks to all-encompassing plate armour, the designs of coats of arms became ever more fanciful and the shield more elaborate. However, the classic kite-shaped shield, although a little squatter, remains the favourite of heralds even today. The notable exceptions are the arms of women who, from the XIVth century CE, began to bear their own coat of arms, typically in a lozenge shape.

As heraldry evolved and it became more important to show off family lineage than to identify oneself on a battlefield, coats of arms became more and more impressive and complex. These devices are known as an achievement in heraldic terms. No longer merely a shield form, they have retainers either side holding the shield (lions, unicorns, knights etc.), the shield might be topped with a crested helmet and even a crown in royal cases. Scrollorigins such as complicated leaf arrangements surround the shield and a motto may be added below which encapsulates a family saying or commemorates a memorable event in their history. 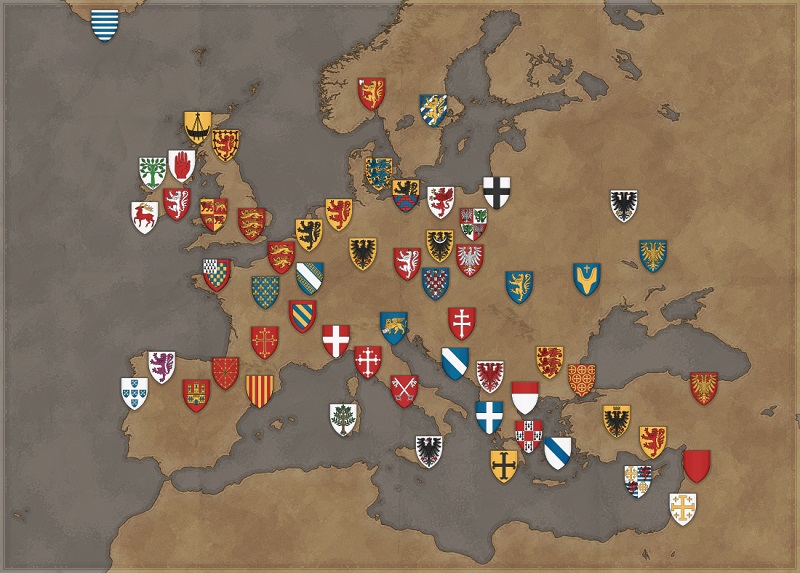 Heraldry employs an extensive range of specific vocabulary so that coats of arms may be precisely described in words (a blazon). The shield, known as the field or ground, is divided into specific areas such as the top (chief), middle (fesse) and bottom (base). The right side of the shield is the dexter and the left side the sinister, with the right and left being from the viewpoint of someone holding the shield from behind, as in battle. The colours used in a shield are known as tinctures and have their own particular heraldic names. The colours used in medieval times were generally limited to:

Green and purple were less commonly used than the others, while in the XVth century CE mulberry (murrey) and orange (tenné) were added to the list. An alternative background to colour was furs, that is designs which resemble the furs which were commonly used in medieval aristocratic clothing. The two most popular were ermine (from the stoat) with many small black tail tips and vair (from the squirrel) which was represented by various white and blue patterns.

To increase combinations, the shield was divided (parted) into different zones of colour by a single vertical (per pale), horizontal (fess) or diagonal line (bend dexter or bend sinister). Alternatively, the shield was divided into four blocks (quarterly), had a chevron, or was divided into either four (saltire) or eight triangles (gyronny). These standard eight variations eventually evolved into a much larger number of divisions and designs. The dividing line between areas of colour could also be altered to provide even more variety, becoming, for example, wavy, crenellated, or zig-zag. Yet another variety was to give the shield a border (sub-ordinary) or impose thick lines of colour (ordinaries) such as stripes, chevrons, crosses and Y-shapes.

Another popular form of identity on shields was to use animate charges (birds and animals) or inanimate charges (everyday objects like spurs, hammers, axes etc.). Monsters from mythology generally only appeared on arms after the medieval period.

The description of a coat of arms had to be precise so that artists could reproduce them without a more expensive visual source. For this reason, a convention of description evolved where the elements which made up a coat of arms were always described in the following order and their exact position noted:

Heraldry still thrives today, of course, and has spread from the individual to the group with clubs, sports teams, and even businesses all creating their own badges of identity. Colleges of arms continue to issue new coats of arms for families, although the process can be both lengthy and expensive so that, even in the more socially mobile societies of the modern world, there is still some distinction and cachet in having the right to them. Coats of arms can still be seen in all manner of places where they send clear visual messages such as those which proclaim state authority on military uniforms and banknotes, those which promote quality and history as on fine porcelain and foodstuffs, and those which promote civic pride such as on fountains and war memorials.

Design Your Own Family Crest